The blog entry is one of our irregularly appearing Throwback Thursday (#TBT) postings. This one is inspired by the hope that spring will eventually bring more than just snow-tolerant crocuses into bloom in New England.

In April 2012 we went on Viking River Cruises‘ “Paris & the Heart of Normandy” cruise on the  Seine, and then once again in May/June 2015 with two other members of our family so that they could also visit a relative’s grave together with us at the American Cemetery in Normandy. One of the included excursions on this cruise is a visit to the home and garden of the famous Impressionist artist Claude Monet in Giverny.

Monet was not a starving artist; during his life he had the wherewithal to have a home in the French countryside where he had a small staff of gardeners and ground attendants to care for his own, finely tailored garden and a private artificial pond filled with water lilies. A tour of his garden starts with the bamboo grove that he had planted in the midst of a man-made island. a bit of an oddity in 19th century France:

At one end of the pond the bright green Japanese-style bridge, covered in wisteria and towered over by bright yellow willow trees, was frequently depicted in many of his paintings. (Click the pictures to enlarge.) 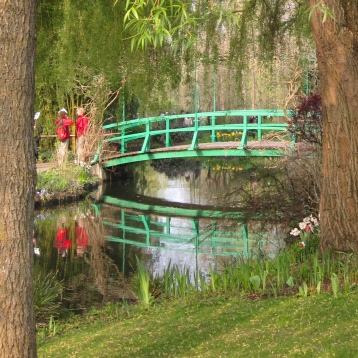 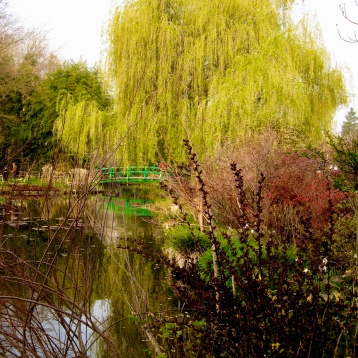 The changing light and cloud shadows of the Normandy skies, reflected in his pond of water lilies, was another major motif in Monet’s painting. Perhaps the best known of his water lily paintings can be found in the massive canvases of the Orangerie Museum in Paris, along with the fabulous collection of his works at the Musée Marmottan Monet (out in the 16th arrondissement of Paris) and the Musée d’Orsay. (Other than a mural in Monet’s workshop – now the gift shop – there are no original Monet paintings in Giverny.) Here are some examples of how reflections of the sky and the surrounding trees affect the look of the pond. Look closely for the ducks swimming around (and the baby ducks walking on) the lily pads in at least one of these pictures: 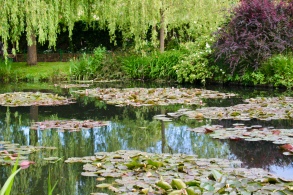 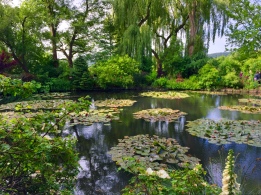 Monet’s house is colorful, both inside and out. I wish we could have taken pictures of the bright yellow dining room or the deep blue kitchen of the home, but we apparently were one of the few visitors who followed the “no pictures” rule on the inside of the house.

The grand main alley (“allee”) runs from the front of the house where two yews are planted. Over the course of the summer, roses grow up over the arches and later in the year the crushed stone of the alley is eventually covered up by nasturtiums in bloom. The two pictures here show how the alley changes from early spring (where the flower beds were filled mostly with tulips and daffodils) to the wider array of blooms and advancing roses by early June:

Here are some other perspectives of the main alley:

And here are some views of other portions of the roughly one hectare garden: 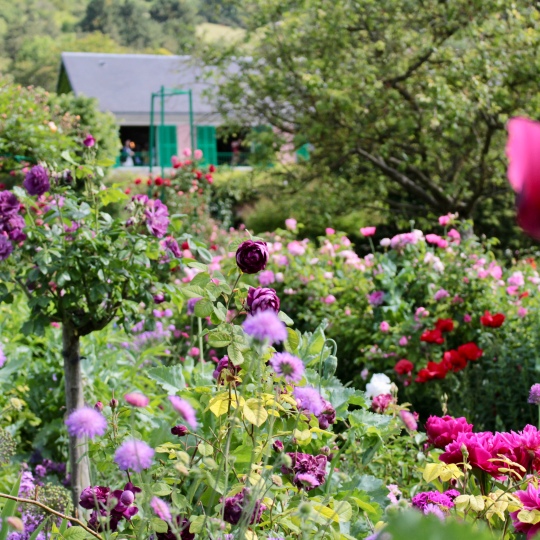 Finally, below is a collage, sampling many of the blooms found in the garden in June. There were multiple gorgeous roses blooming then, including my personal favorite, the purple rose: 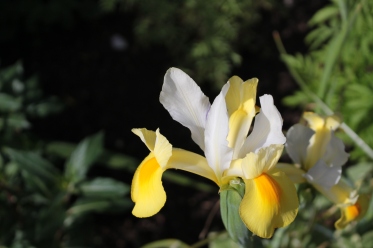 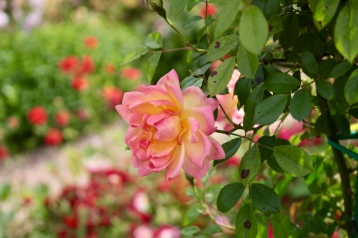 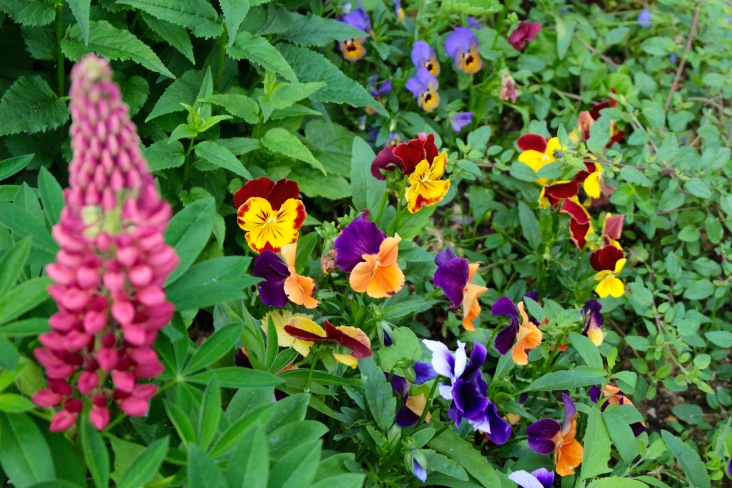 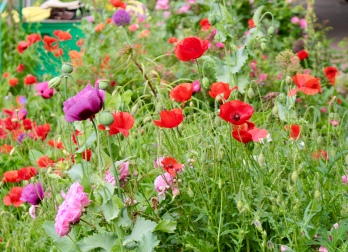 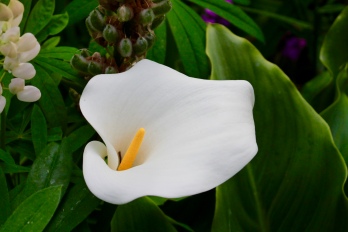 Please forgive me for including so many photos in this post. In our two visits to Giverny, I took well over 300 pictures. I’m surprised that I was able to prune it down to this small of a collection – I hope that you enjoy them!

One thought on “#TBT: Monet’s Garden”