It’s been over two months since we returned from our December 2017 Viking River Cruise’s Romantic Danube cruise on the Viking Egil longship, so it’s about time we wrap up our blog posts about the last two destinations on the trip. We were part of a group of just six Viking passengers who went on one of Viking’s optional excursions in Vienna: Jewels of the Vienna Ring. The main reason that we picked this tour is that it included a long visit at the Kunsthistorisches Museum (Museum of Art History).

Our tour guide helped us navigate on the subway from a stop near where the ship was docked, through a few stops into the center of the city, emerging next to the St. Stephens cathedral: 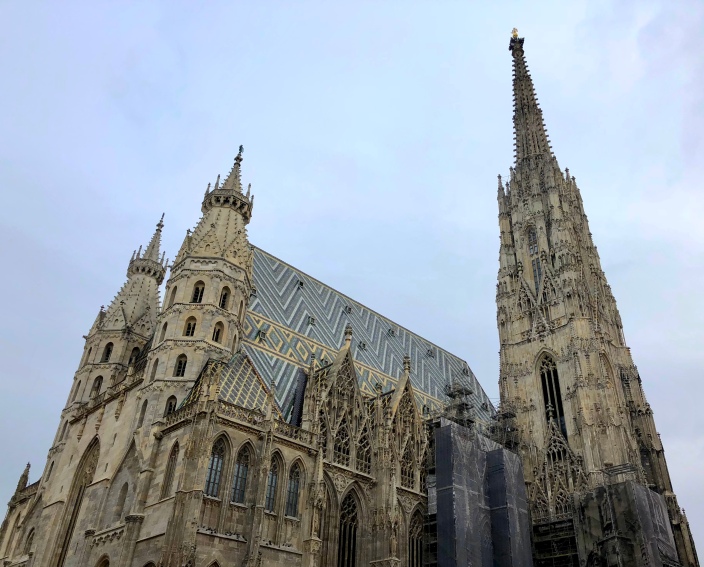 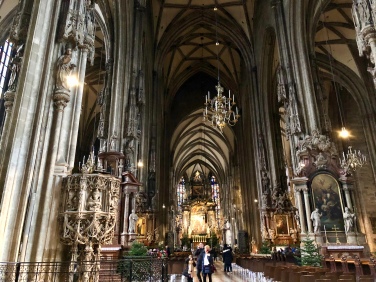 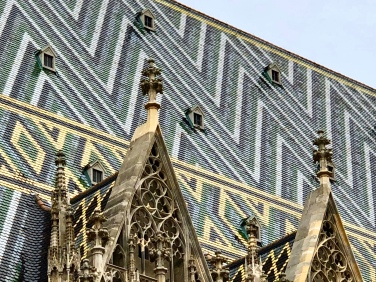 Along the way to the museum, we walked past the Bitzingers Würstelstände (sausage stand), with its unusual feature: 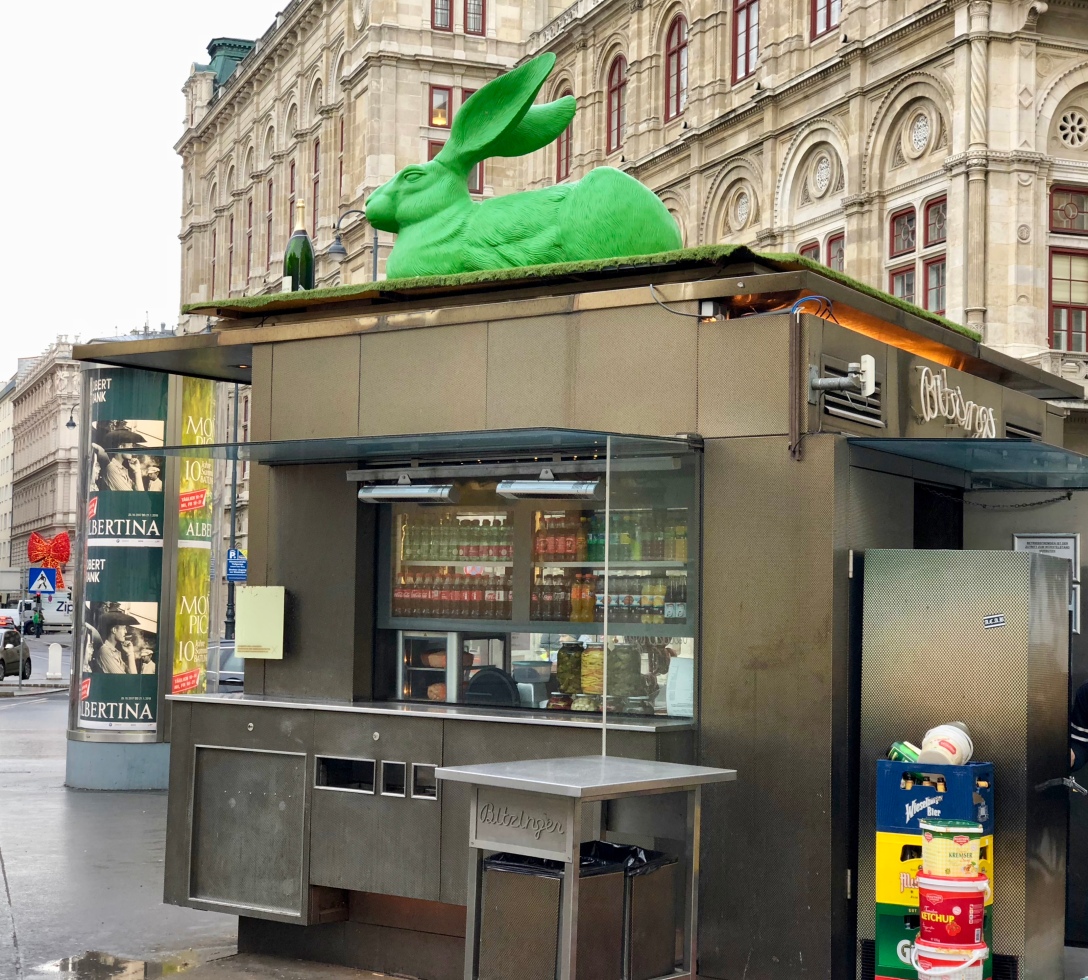 Informed by our tour guide that rubbing the rear end of this sculpture was supposed to help girls find a groom, we could better understand the peculiar discoloration: 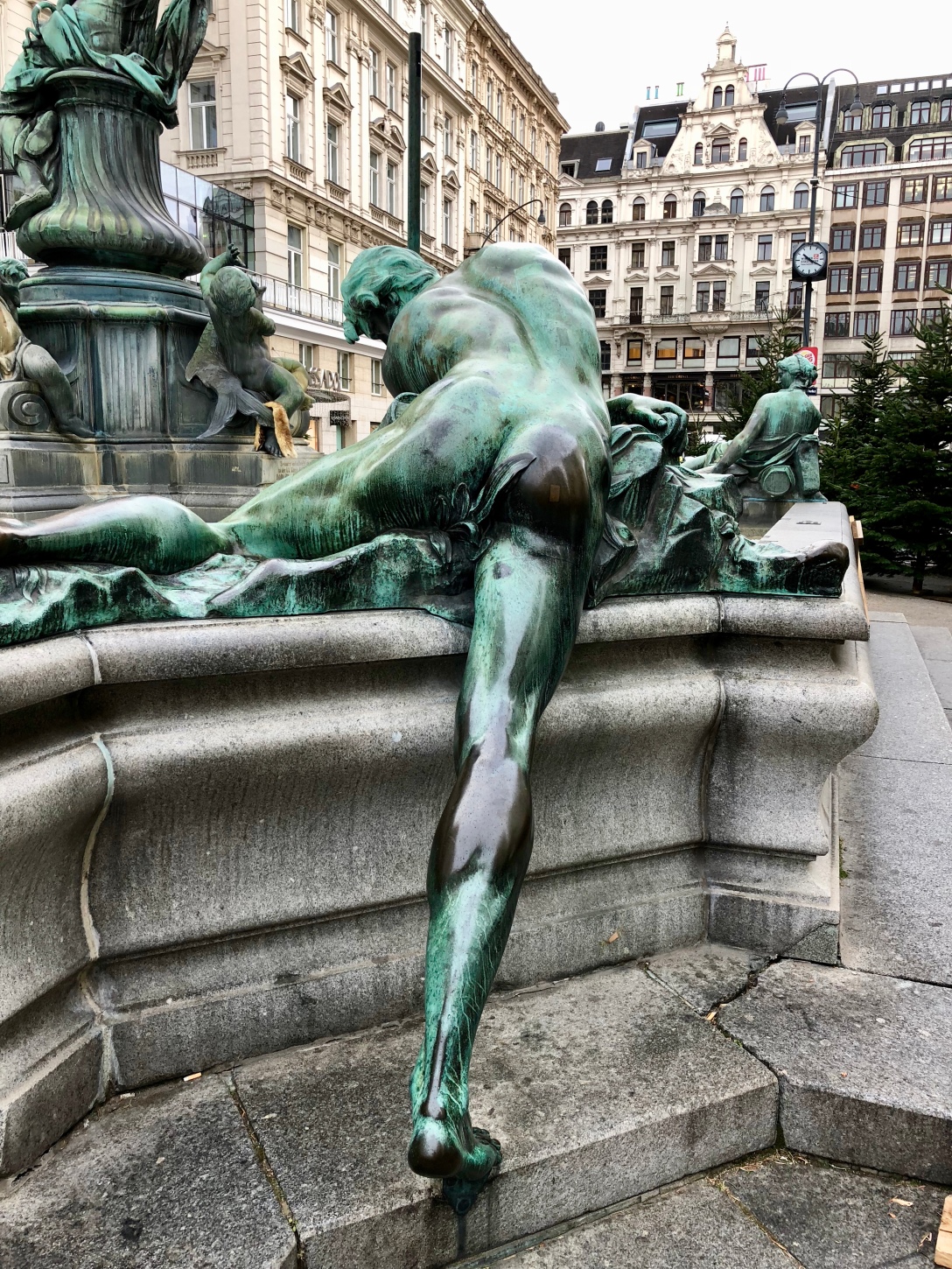 On the Albertina Plaza there are memorials that includes these sculptures, the Kneeling Jew and the Monument against War and Fascism: 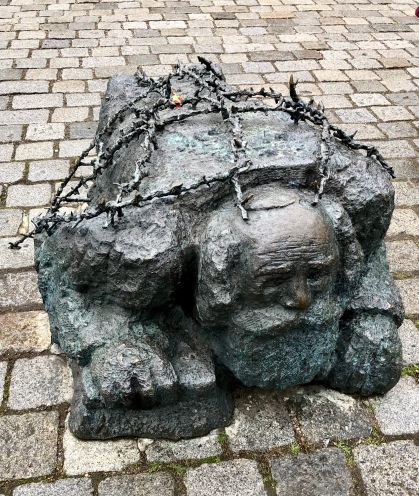 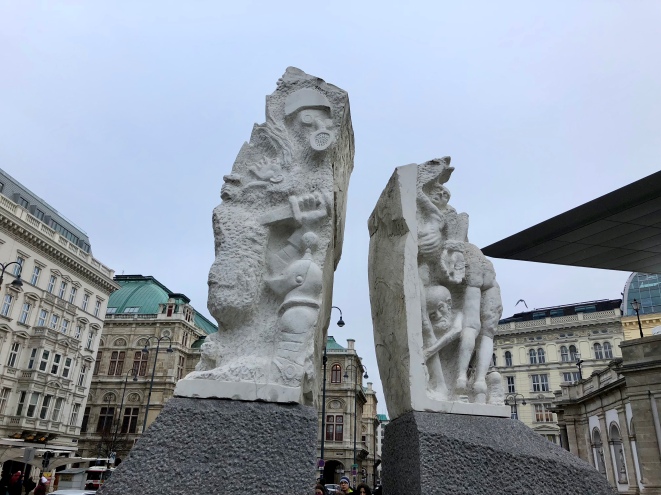 Monument against war and fascism

Vienna is known for its Christmas markets, but we didn’t have much of a chance to check them out, other than a really quick dash through the one market outside the museum. The markets are usually at their most beautiful in the evenings with their lights on, but even during a dreary, drizzly day the seasonal street decorations were charming:

Our time at the museum was the highlight of our day in Vienna, and not just because we got out of the cold rain and checked our wet coats. This museum houses the art collection of the Hapsburg emperors, and the building itself is an elaborately decorated work of art itself, where artisans spent nearly ten years painting and decorating after the building was completed. Check out the dome towering high above the museum entrance (and the restaurant one floor above): 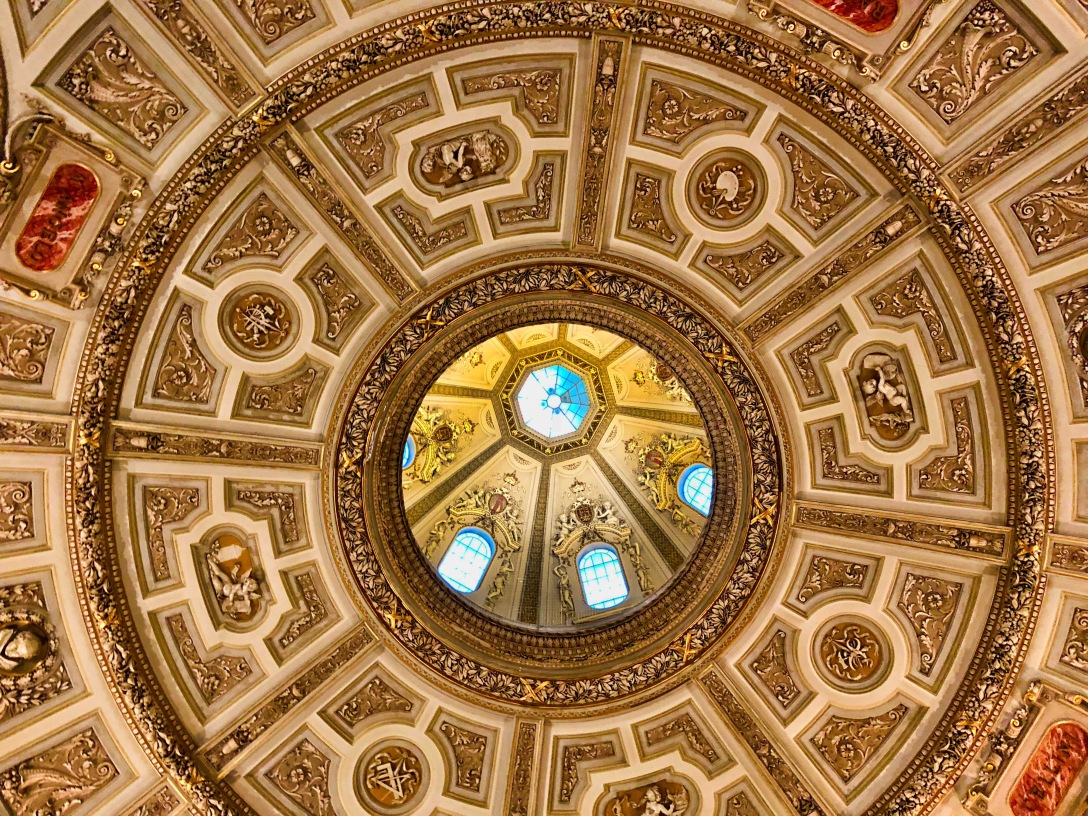 The museum’s central stairway was amazing: 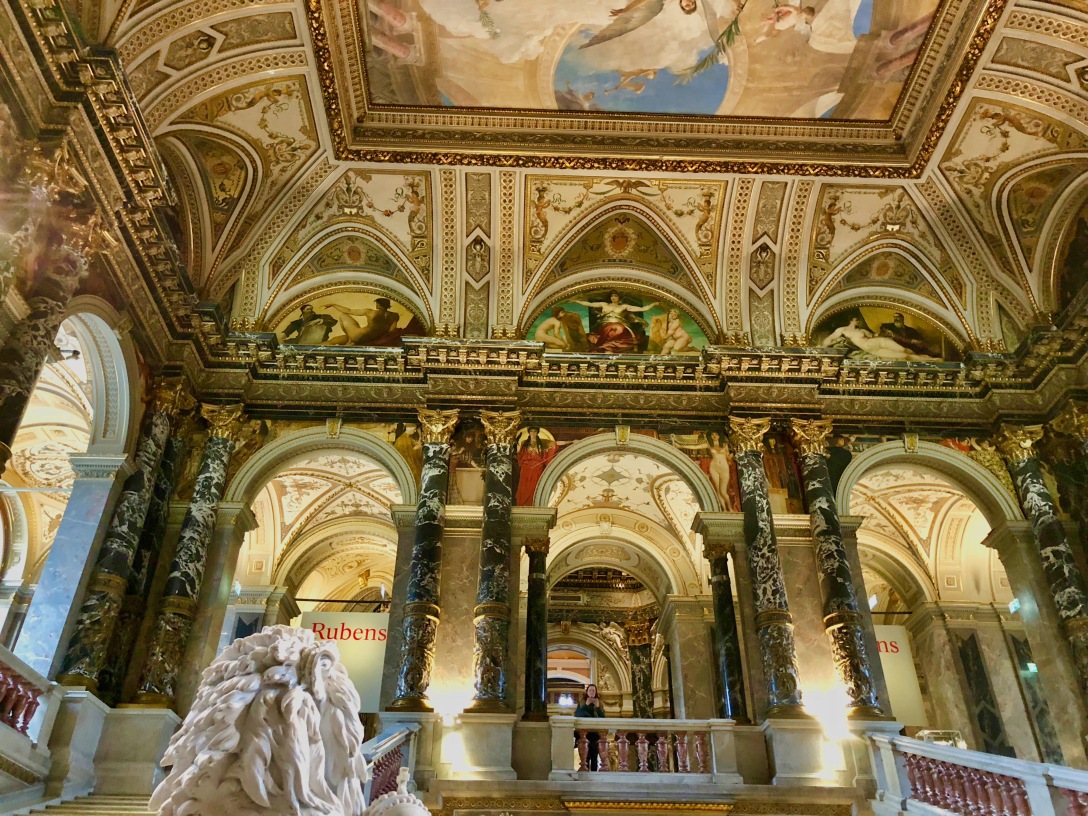 Wrapped around the top of the arches are pictures painted by Gustav Klimt, his brother Ernst and their friend, Franz Matsch, that depict important periods of art history. (You might remember that one of Klimt’s paintings was the portrait of Adele Bloch-Bauer, which was the subject of the Helen Mirren and Ryan Reynolds movie Woman in Gold. We had considered breaking away from the group to visit the nearby Belvedere Museum where Klimt’s iconic painting The Kiss and many of his other works are housed. Alas, not enough time. Maybe the next time that we’re in Vienna?)

During 2018 the museum, as part of a special exhibit, has erected a four ton bridge across the top of the stairwell to allow visitors an up-close view of these works. Thanks to my zoom lens, here’s a close up of one of Klimt’s works about Egypt: 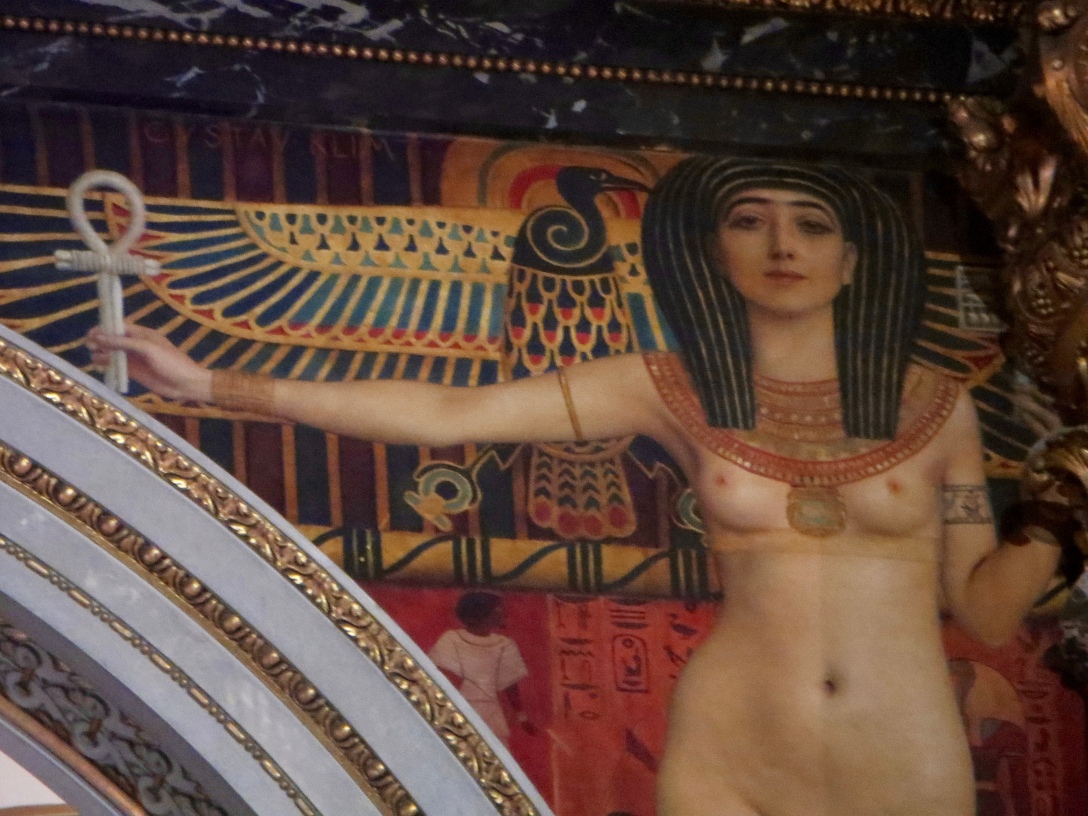 The staircase’s ceiling is a gorgeous mural with unusual depth that gives the illusion of being a dome: 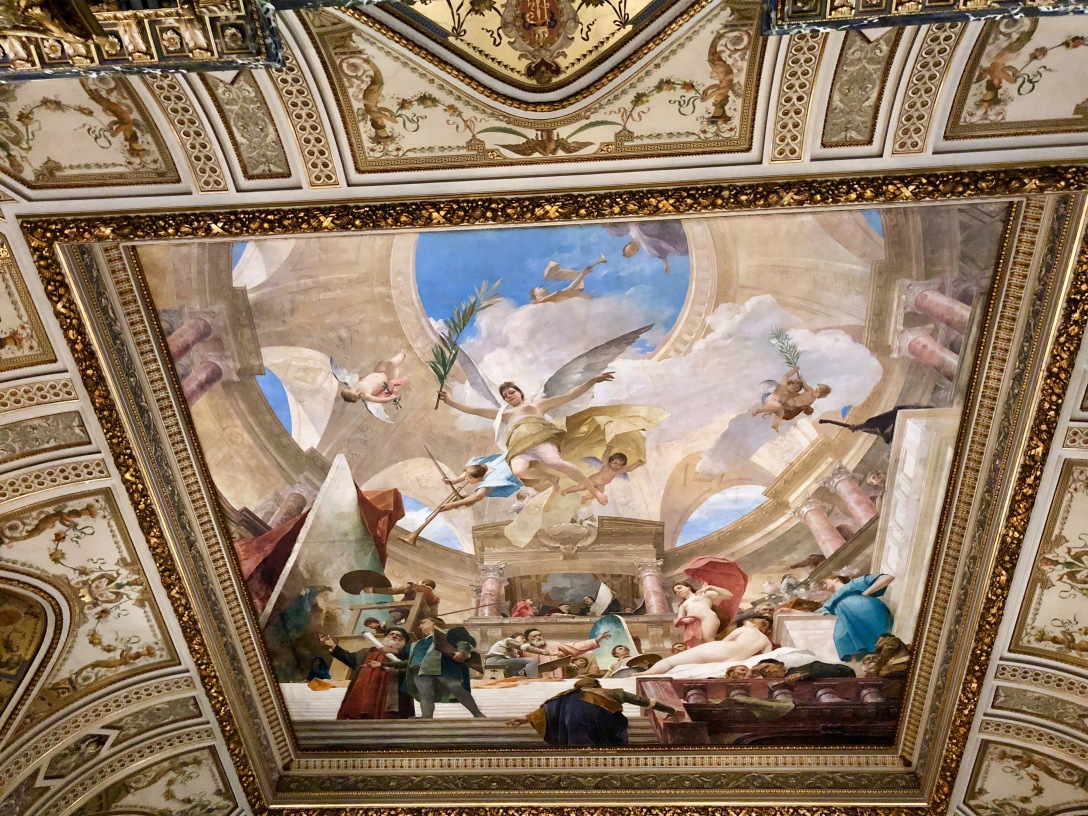 I really liked the drama of  one of the sculptures on the staircase: 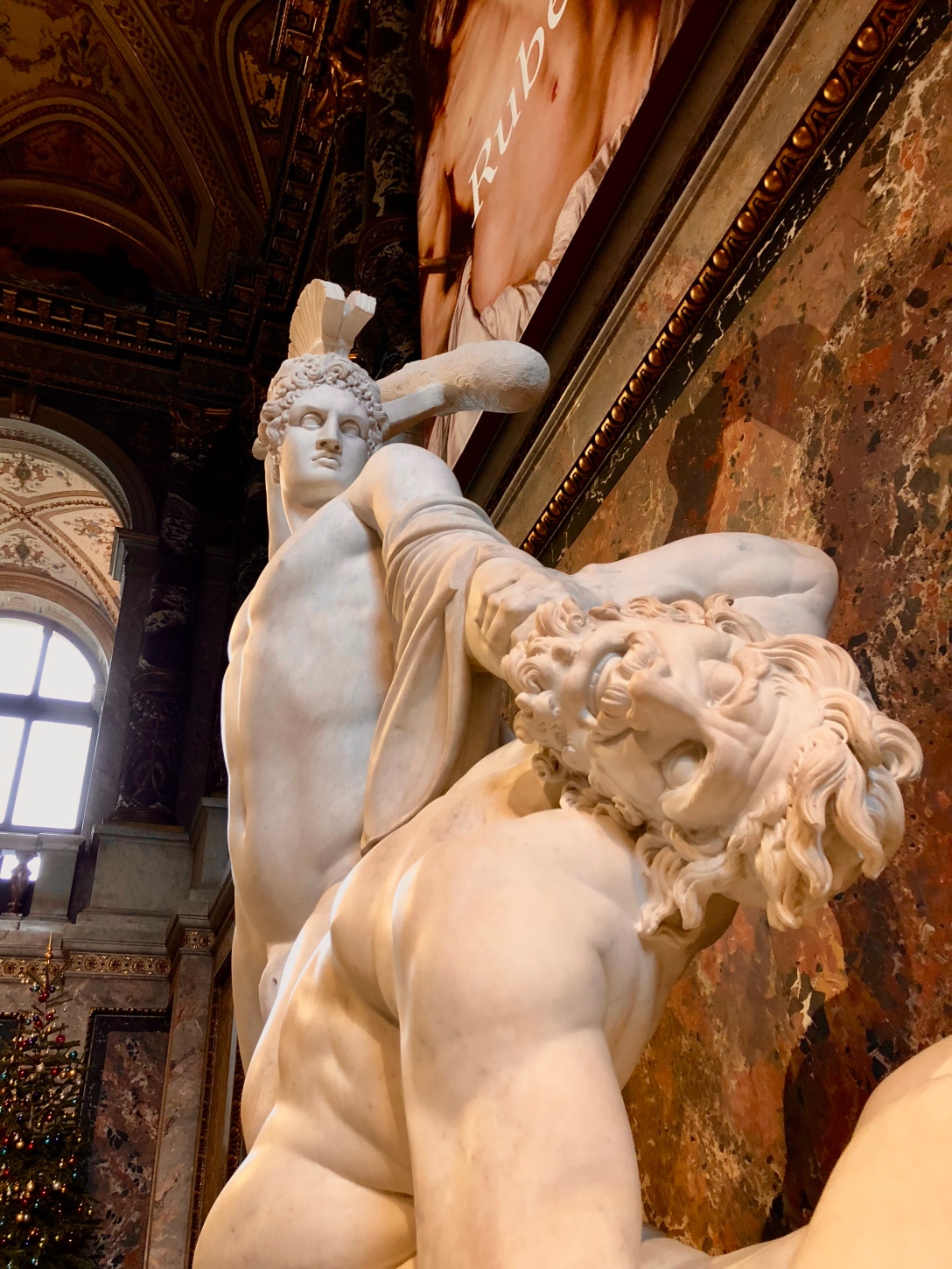 The real reason that we booked the excurision to this museum is that there is a painting by Johannes Vermeer in their collection – one of just 34 attributed to him – and we’re on something of a quest to see them all. (We have an upcoming blog post about our recent trip to see the Vermeer show at the National Gallery in Washington, DC.) Vermeer is perhaps best known for his painting, Girl with a Pearl Earring, due to the book and movie of the same name. Our tour guide had a degree in art history, and was happy to help make sure that we would see it while we were there, but apparently it’s often moved around and she had to ask three different museum workers where it was currently located. We did track it down, finally. It’s called The Art of Painting: 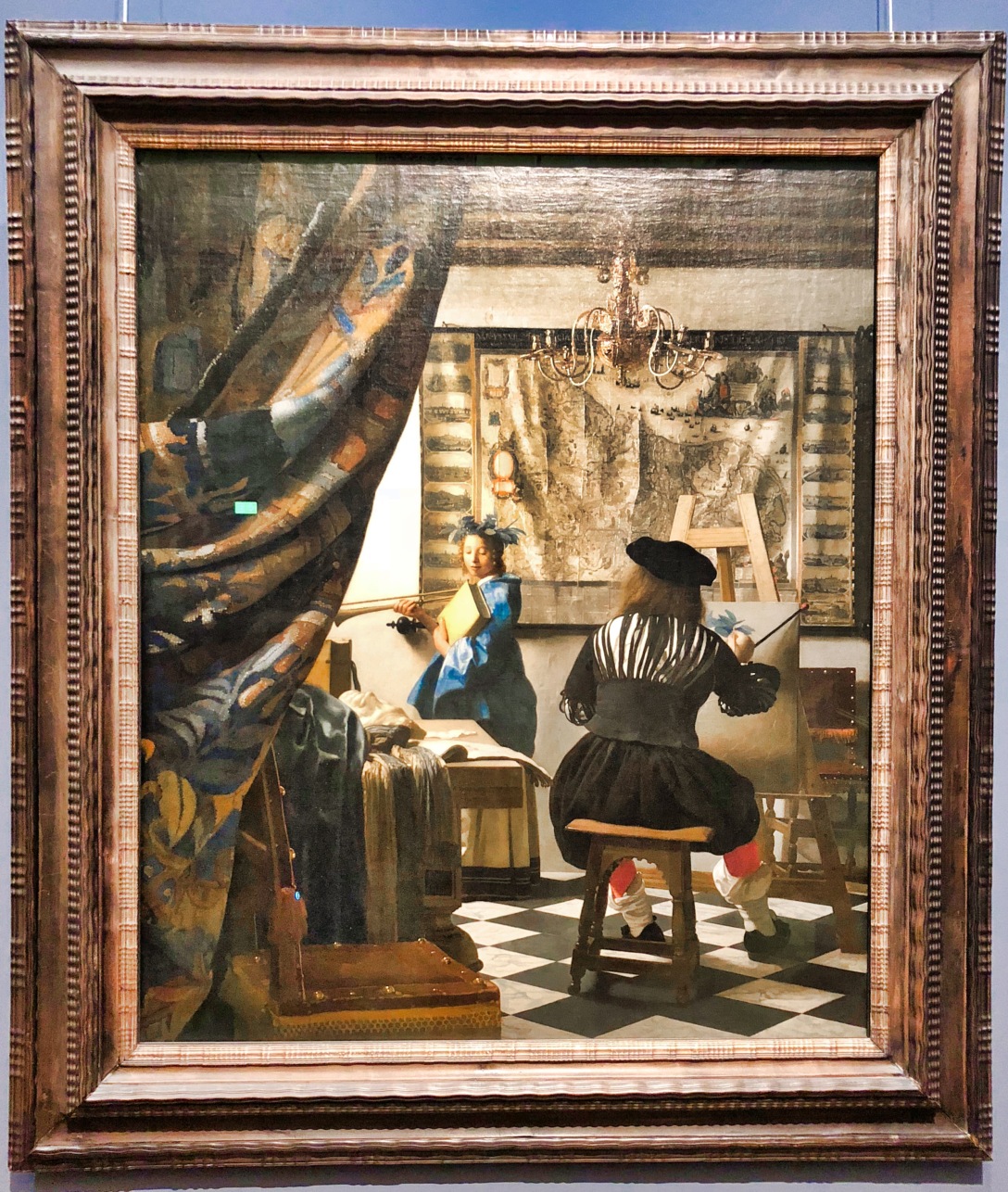 The museum had their share of Rembrandt paintings, including these self-portraits:

Other famous works in the museum’s collection include these paintings by Pieter Brueghel the Elder:

Small tour groups are nice, since you generally get more personal attention and don’t feel as much like a tourist. However, this tour did include an incredibly cheesy and touristy feature: a ride in a horse-drawn carriage. We could have just as easily done without that part, since we ended up riding together with another couple in a fogged up carriage, but we went along for the ride and ended up having a nice conversation with our fellow passengers.

We deliberately made sure that the much younger third couple in our group had the second carriage all by themselves, since the young man had let spill that there was going to be a special occasion on this tour – a marriage proposal. Sure enough, at the end of the ride we emerged to witness this scene: 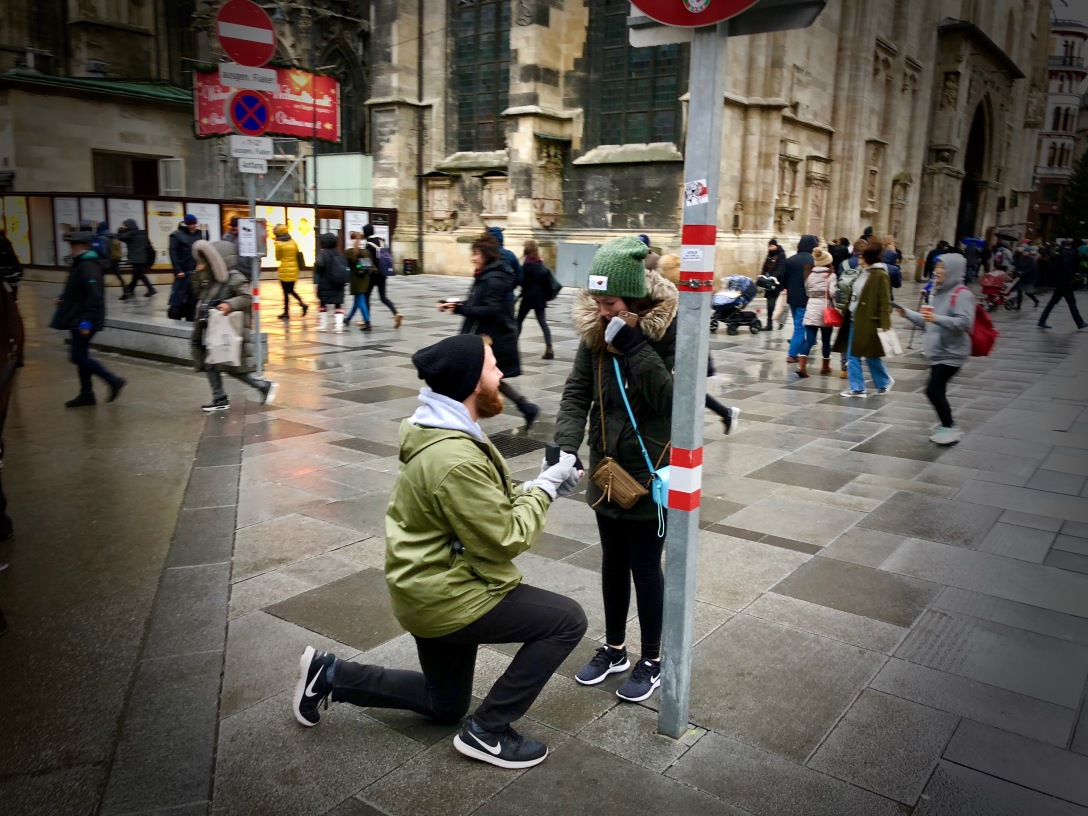 On that romantic note, we ended our day in Vienna. Next stop: Budapest.

2 thoughts on “A Rainy Day in Vienna”