Even after spending three days in Paris with all of its beautiful panoramas, our initial impression of Prague was one of visual overload. Everywhere we turned during our three days there, our eyes were taken in not just by the astounding vistas, but also by the incredible detail on the buildings. Never badly bombed during WW2, the city has a wide range of original architecture, from medieval to Baroque, Gothic, and Art Nouveau to modern.

Here is probably the best known of the modern additions to Prague – the Dancing House. Co-designed by architect Frank Gehry, he originally thought to call it the Fred and Ginger house after Fred Astaire and Ginger Rogers:

We had so many vista shots from our collection of photos of Prague that we really liked. Here is a slideshow of just some of them:

It isn’t just the buildings and views that catch your eye. Just look down at the sidewalks: 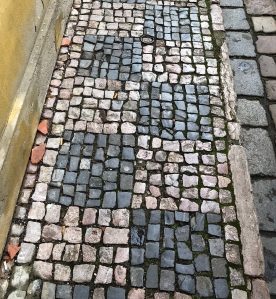 Our time in Prague was booked as a pre-cruise extension through Viking River Cruises. Viking smoothly handled our transfer from the airport to our hotel. At the end of our time in Prague they also bused us and around 30 other Viking Egil passengers to Nuremberg to join our ship there. We took advantage of an included walking tour of Old Town, which provided a quick overview of the central part of the city which, frankly, is heavy with various forms of tourist traps selling foreign-made junk. Luckily, during our walk our guide pointed out the more historic sites and and steered us toward better shops, including a wonderful store called Manufaktura that only sells goods from the Czech Republic. We bought some great souvenirs there.

After the city walking tour, we took an optional excursion provided by Viking that included a tour of the Prague Castle complex followed by exclusive access to the Lobkowicz Palace where we had lunch (the hot goulash was much appreciated after the bitter cold and wind of the city tour), a private classical music concert, and a tour of the Palace’s museum. The museum held an impressive collection of the Lobokwicz family’s paintings, ceramics and porcelain, military and sporting rifles, musical instruments, and original scores, including some by Beethoven and Mozart.

We stayed at the Augustine Hotel, which is in the Mala Strana (Lesser Town) section of Prague located just downhill from the Prague Castle and only about a 5-minute walk from the end of the Charles Bridge that leads to Old Town. The Augustine is one of, if not the nicest hotel we’ve ever stayed in. The hotel is a former Augustine monastery, but the accommodations were anything but monastic. The rooms had art works including sculptures, and the bathroom had toasty heated floors. I touch on the hotel’s bar and its special beer below, but I have to mention one thing about the bar. It’s not only beautiful, but they also serve the best hamburger that I can ever remember having anywhere.

During our time in the Czech Republic we also went to the Jewish Museum on our own and took an excursion to the Terezin ghetto/concentration camp. We’ll be writing a separate post to describe those visits.

On a happier note, multiple Christmas markets were being held in Prague while we were there. Some were tiny, like the market near our hotel in Lesser Town with only about 10 booths. Larger venues at the Old Town Square and the Prague Castle seemed to have may more food stalls and fewer crafts booths than we had seen at German Christmas markets while on previous winter cruises. Even so, the setting for the markets added to the experience:

Multiple guides in Prague each made a big point of telling us that the Czech consume far more beer than the citizens of any other country, and are even well ahead of the usual suspects, nearby Austria and Germany. I did my best to help out the average while I was there. The St. Thomas (Svaty Tomáš) dark lager, only available at the Augustine Hotel and brewed based on a recipe from 1352, was my favorite beer of the trip. I bought extra bottles of St. Thomas to take along on our cruise, but also picked up a few samples of Czech beers (Lobkowicz, Svijansky Rytír, Radegast Ryze horka 12) to accompany the 1.5L bottle of freshly brewed (and unpasteurized) beer from the Labut microbrewery in Litomerice.

Photos of other highlights from our visit to Prague:

We knew that Paris is a global destination for couples seeking the ultimate wedding photos, like the one we used to wrap up our last blog posting from there, but apparently Prague has its own fans in the wedding photography world. Here’s part of a photo shoot that we came upon while walking the streets:

2 thoughts on “Pre-Cruise: 3 Days in Prague”